Skip to content
Rogan, Anfang Discuss How the PSIA-AASI National Team Keeps Building for the Future

Rogan, Anfang Discuss How the PSIA-AASI National Team Keeps Building for the Future

Ask the best skiers and snowboarders what they’re working on, and they’ll hardly have to think before they tell you.

That’s certainly the case with PSIA Alpine Team Coach Michael Rogan and AASI Snowboard Coach Scott Anfang who, despite being a little more than a month away from closing the chapter on the 2016-2020 PSIA-AASI National Team, are still working on new ways to push their team, teaching, and snowsports into the future.

“For us to get better, and keep challenging what we’re teaching and how we’re skiing, we have to get out of our comfort zone once in awhile,” Rogan said. “A great way to do that is for us to really go skiing together, try some new things, and check in on what we’re hearing from the divisions and individual schools we are talking to.”

In a typical season, when team members of every discipline are flung across the winter world, leading clinics, attending events, and taking advantage of educational opportunities, full team collaboration can be hard to achieve. Which is why at the beginning of this team’s term, the alpine squad began to schedule “midseason training” sessions.

Last season’s session was held in Aspen, Colorado in preparation for Interski 2019 in Pamporovo, Bulgaria. Last week, the team wrapped up midseason training in Snowbasin, Utah, where one of the highlights was charging the 2002 Winter Olympics Downhill Course on competition-ready super G and slalom skis.

“Thanks to suppliers like Volkl, and the help of Paul Guimond of Atomic, we rode 210 centimetre long super G skis with a 40-meter turn radius, which is not something we have experienced, and worked on getting comfortable going really fast,” Rogan said. “Boy, if you want to talk about experiential learning!”

Switching between the super G and slalom skis provided a nice contrast on the different applications of fore, aft, and lateral balance, according to Rogan. As for the impact of the team’s educational efforts, Rogan was gratified to hear other alpine team members discuss how they are witnessing the impact of the Learning Connection in regards to Technical Skills, Teaching Skills, and People Skills in the clinics they are leading.

Anfang and the AASI Team also got in plenty of riding while celebrating the snowboarding community with team members, instructors, pro riders, manufacturers as they honored the life of snowboard pioneer Jake Burton at the US Open in Vail, Colorado last week.

“It was amazing to be with that group and, for what may be the first time, not have a project that we were on a deadline to work on,” Anfang said. “Just to ride together as snowboarders and give each other tips and feedback and learn more ourselves instead of always leading was a really cool thing.”

Anfang said Shaun Cattanach, a former AASI Snowboard Team member who is leaving Burton after 21-plus years, was also there, and together the two old friends celebrated having spent more than two decades at the elite level of the sport, as well as the opportunities in front of them.

“With Eric Rolls and Tony Macri set to coach the next team, I think the entire team is in a perfect place to pass the baton,” Anfang said. “It couldn’t have been organized better, especially with the way this team has come together. For me, it’s really awesome to be introduced as a PSIA-AASI National Team member, without any mention of the discipline.”

Anfang added that the team surprised him with a poster of the five different 32 Degrees covers he has graced over the past four years, as well an image of the mock fight photo the team took last season. 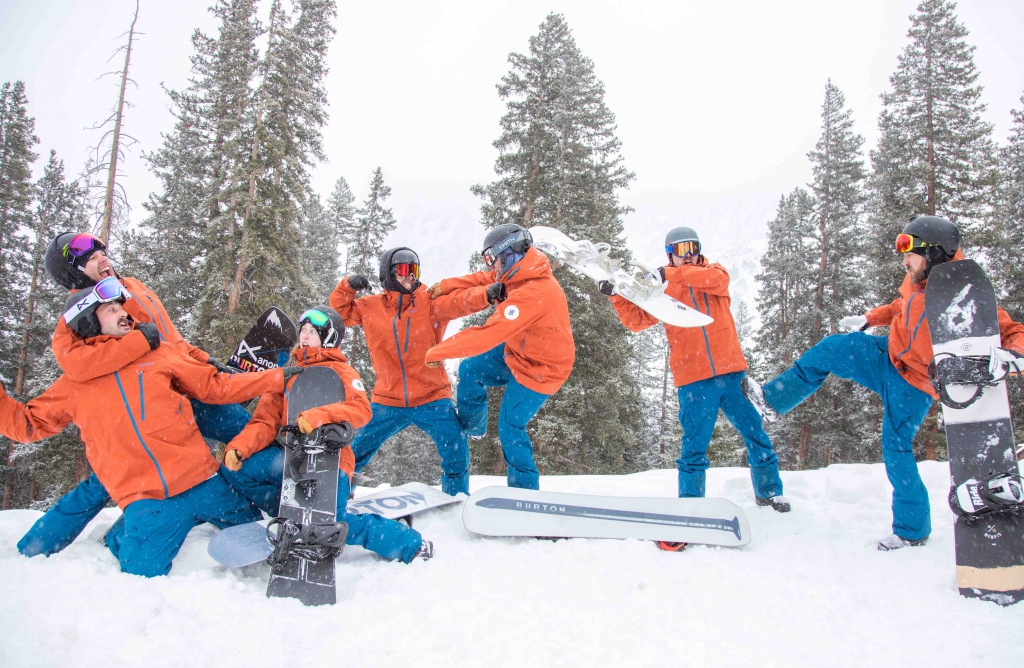 Of Anfang’s tenure as coach, Rogan said, “I can’t say enough for what Scott has done for snowboard instruction, and for the way he worked with the Alpine Team. He worked so hard on behalf of the snowboard community and on different ways to get people out on the snow together. I think he changed the focus of the snowboard team in terms of education and collaboration.”

Don’t miss your chance to ride, learn, and laugh with all the PSIA-AASI National Team members at National Academy, Rider Rally, and Telemark Academy in Breckenridge, Colorado.